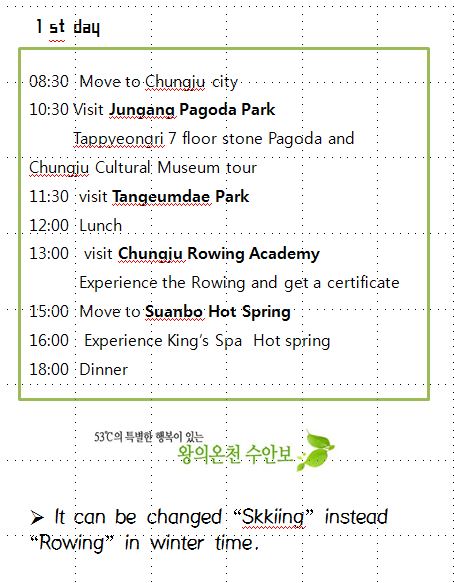 Chungju City is located at the central and northeastern part of Korea.

Tangeumdae Terrace was originally a small mountain called Daemunsan Mountain, which has beautiful scenery, as rugged precipice with Namhangang River is flowing below with rocks of fantastic shapes and pine tree forest getting along in harmony.
This place was named Tangeumdae Terrace, as this is where Ureuk, the Sacred Musician, played Gayageum more than 1400 years ago (about AD 534), during the reign of King Jinheung of Silla Dynasty. Ureuk lived during the King Gaseul of Gaya Confederacy, which he foresaw the destruction of the Confederacy and became naturalized to Silla. Thus, King Jinheung was delighted and asked Ureuk to reside in Chungju, and had the young men – Beopji, Gyego, and Mandeok – be trained dancing to protect Ureuk, and Ureuk always played Gayageum sitting on the Sansangdaeseok Rock.

Furthermore, it is a very famous battlefield. During the Imjin War, General Shin Rip, whowas Sunbyeonsa at that time, led more than 8,000 soldiers and used the strategy called Baesujin to fight against the Japanese led by General Konishi Yukinaga and was badly defeated after a fierce battle, he sacrificed his life for the country by throwing himself into a long-flowing river. Also, there is a cliff by the Namhangang River to the north of Tangeumdae Terrace called Yeoldudae, which is about 30 meters high, where General Shin Rip used to go up and down 12 times during the war to soak the string of the bow to shoot arrows and cheer hig soldiers. Thus, it came to be called Yeoldudae (Yeoldu means twelve).

Chungjuho Lake It is the largest scale multi-purpose dam in Korea connecting Chungju, Jecheon, and Damyang, and is an artificial lake with the largest area of freshwater at 97kmI.

In the surrounding areas is kept a marvelous view of Danyang Palgyeong (eight wonders of Danyang) including Woraksan National Park, Geumsusan Mountain, Oksunbong Peak, and Gudambong Peak, which changes their colors and appearances depending on the season to contrast with the blue waters, and there is a continuous flow of tourists visiting the place to enjoy the water tour at Chungjuho Lake.

The rowing in Korea has continued to develop starting from winning the gold medal at the 2006 Asian Games in Doha. As a result, we have succeeded in holding a huge event called 2013 World Rowing Championships. This would become the venue of opportunity for Korea’s rowing to improve one more step forward as the member in the global stage.

The Korea Rowing Association will continue to make efforts to approach close to the citizens, by developing various programs to discover and train outstanding rowing athletes to win awards at international events, expand the base through daily sport activities, and establish rowing infrastructure. These efforts would serve as foundation for rowing to become the center of advanced Korean sports.

The water of Suanbo Hot Spring is alkalescence hot spring water at 53℃ and pH8.3 flowing out from 250m underground. It contains various minerals beneficial to human body including lithium, calcium, sodium, fluorine, and magnesium, and the water quality is soft and light.

The structure of stratum determines the components of hot spring water, and the stratum in the Suanbo Hot Spring area is phyllite of Ogcheon system, and barley stone of sedimentary rock forms the main stratum, so not only far-infrared rays (Bio Stove), but various mineral ingredients are abundantly contained. Thus, it is world-renowned hot spring water beneficial to the human body.

Suanbo Hot Spring water is a lively hot spring water full of life, and does not rot for one month. If you take a bath with this hot spring water, it delays aging of the cells, so you can maintain your youth for long time.